June, Bette, and Gigi are competing one final time for a spot at the prestigious American Ballet Company. With the stakes higher than ever, these girls have everything to lose...and no one is playing nice.

June is starting to finally see herself as a prima ballerina. But being the best could mean sacrificing the love of her life. Legacy dancer Bette is determined to clear her name after she was suspended and accused of hurting her rival, Gigi. And Gigi is not going to let Bette--or the other dancers who bullied her--go unpunished.

It all comes down to this last dance. Who will make the cut? And who will lose her dream forever? 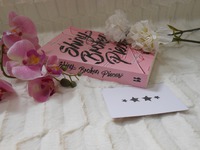 It felt so good to be back at the academy after all this time! I was so happy when the second book came out in this series. And let's admit, this book looks so gorgeous. I also can't wait for the Netflix show.

I really enjoyed reading this book. Even though I found it kind of confusing in the beginning. Not because of the book itself, but because I kind of forgot who the characters were and what their relationship was. I was mistaken some characters for other characters and made the whole story complicated and it was all my fault. But after a while it became clear who the characters were and what their background story was. When it all became clear, I found myself drawn into the book and I couldn't put it down anymore.

The ballet world is so cruel and rough and even this time the girls will do whatever it takes to get the leading role. Everyone wants to be the best, but only one will make it through. Who takes revenge and who will get hurt this time? These questions keep you up at night to find the answers. It's hard to put the book down.

I really loved how Gigi's character changed in the second book. She is such a good girl and kind of naïve in the first book. She easily takes the role of the victim without fighting back. She came back stronger and is looking for some revenge. This makes the story even more interesting and makes the story so tense. Gigi wants to revenge herself on anyone who wronged her, and she won't let anyone get in her way this time. This whole new Gigi makes her character so much more interesting.

The story makes unexpected turns, which make you continue reading to get all the answers you need. The things the girls do to each other get worse and worse each time, but where's their limit this time?

I liked this book more than the first one if I can be honest, even though I did like the first one also. I really liked the story and the characters. I kind of hope that there will be a third book in the series to explain what they will become in the future. #fingerscrossed