Estelle is the headstrong daughter of Fleur, a Resistance legend who disappeared during the Great War, supposedly killed while helping Allied soldiers to escape.

Christa, an only child, longs to break free from the constraints of London suburbia, and fantasises about the ethereal Belgian heroine who saved her father.

When Estelle comes looking for the truth about the mother, she believes deserted her, an intense friendship grows between the two young women. Estelle invites Christa to De Eikenhoeve, her family's idyllic country estate. There, Christa encounters Estelle's two brothers - brooding, tempestuous Robbe and dependable, golden-haired Pieter - and during that long hot summer, passions run high. When war breaks out Christa is forced to return home, but not before she has done something she will regret for the rest of her life.

Christa arrives back in England a changed woman, while Estelle decides to follow in her mother's footsteps and join the Resistance. Little do they dream that Fleur was betrayed by someone close to them, and that the legacy of this betrayal will have heartbreaking consequences for them all. 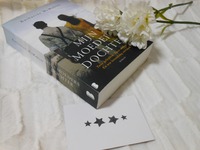 I like to read more romance novels lately than before. I have noticed that I prefer romance novels that are situated around the time of the first and the second world war. So, I could not resist this book when I came across it.

The story started rather slowly in my opinion, but there is a mysterious touch to it that made me want to continue reading. The storyline was rather vague, if you ask me, which made the story kind of difficult to understand in the beginning of the book. For example, I did not know nor had I the slightest cue where the storyline was going. It made it unpredictable and slightly mysterious, which got my interest. I could not put it down anymore and I was completely absorbed by the story. I forgot time and place while I was reading.

It is a relaxing story and at the same time very instructive. We got a lot of details about how things were in the second and first world war, without having the feeling of being in a history class. It feels like you traveled back in time and ended up in the second world war. There were a lot of details about the art and culture from that time, which made it so realistic to read. I really liked that a bout the story and it took the whole story to another level.